Rudeness Never Pays, or A Fresh Start in My New Studio


The boxes aren't all unpacked yet, but I needed to get back to work. Here's my easel set up with a freshly stretched and gessoed canvas, ready to go. It it scary or exciting to face that big blank surface? Well, for me, it's both.

Not only is it intimidating to mark up a white surface, but a substantial amount of time and money has gone into producing this big white surface. Stretcher bars were purchased and put together. Canvas was purchased, cut to size and stretched onto the bars. Gesso (white primer) is painted on and dried three times. Then and only then is the surface ready to use.

A few days ago, while visiting my sister in Northern California, I was probably rude to one of her friends. The friend asked me what I did and when I told her I am an artist, she said, "Oh lucky you, that must be so much fun!" I think my reply to her was "Actually, it's the monkey on my back." She was taken aback at my reply and the conversation ended abruptly.

Now, at that time, I was thinking about money (or lack thereof) and of my seeming interminable struggle to work full time as an artist. Which I've done for the last two years, but it's a precarious situation at best. I need to start selling my work in order to keep on doing what I love. So when she gave that bubbly reply, my thought was, if only I didn't have this obsession, I could be happy working at some job and cruise along looking forward to my yearly vacation and be at peace.

The normal person out there has no idea what it's like to attempt to live the life of an artist. And it's really not their fault. People don't get any art education in school. The media shows caricatures of artists, artists are portrayed as crazy, eccentric, rich and famous. No wonder the general public says dumb stuff when you admit to being an artist. And who gets to claim to be an artist? Well, anyone who wants to.

Anyway, now I feel badly that I was curt, abrupt, rude, unfriendly. I'm resolving, yet again, that when these situations come up, I will make an effort to have a friendly conversation with the person, starting with the positives, like that I'm never, ever bored.

And occasionally, I'll use this blog to show some step by step photos, so that non-artist viewers might see that a painting doesn't just magically appear. 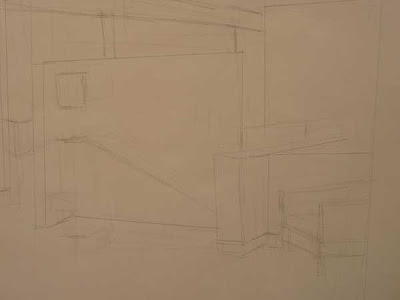 For me, lately, my first step is to rough in basic shapes with a charcoal pencil. My first challenge yesterday was to find the charcoal pencil. Yes, I found it buried in a box. So I proceeded. The reason it's hard to see is that the charcoal is applied fairly lightly, so it doesn't interfere with the paint. I don't use pencil because sometimes the oily graphite doesn't allow the paint to stick to it. 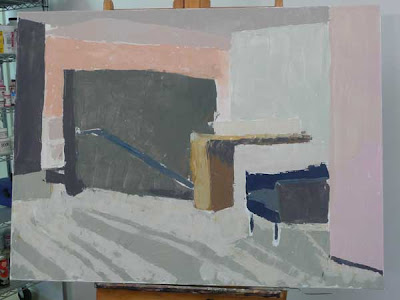 I mix a batch of Golden Acrylic Light Modeling Paste with a mixture of paint in roughly the color I want. I spread it on with a palette knife, covering the area, kind of like spreading butter. I proceed with each area, quickly (like it takes a few hours), until the white is no longer anywhere to be seen. 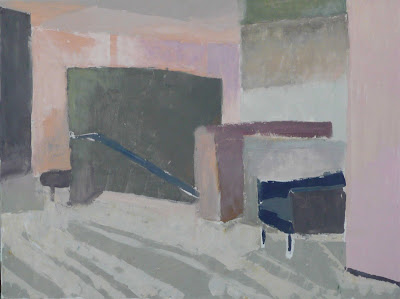 After the first layer is dry, I go in with a brush, and start to add variations in the color, move things around, change sizes and angles. If you compare the two paintings, you'll see a few changes.

So here it is, probably 6 hours into the painting, and I've barely started. Now comes the long process of adding life to the painting.

Do I continue on? Well, yes, so far for 30 some on years, I've continued on.
Posted by Barbara Cowlin

Hi Barbara - not that it might make any difference to you, but I don't think what you said was rude. People do pop off thoughtless comments, and sometimes an abrupt answer like yours is the only way to get them to consider that a situation is much deeper than they realized. It happens not only for us as artists, but I would suppose in every profession. Maybe those of us trying to make a living at it are more sensitive than people collecting a regular paycheck, but anyone self employed has the same sensitivity.

I think your reply was fine and appropriate. Look forward to seeing this painting develop!

Lee Ann, Thanks for your input. Yes, it did make me feel better. But I think I need to work on a good reply that will be honest but will further understanding of what it's like to be self employed and to be an artist.I'm just not quick enough on my feet to ad lib. Especially if the comment hits me when I'm in a pessimistic mood!

By the way, I've subscribed to your blog. Can't wait to spend some time looking at it!

Hi Barbara,
I am happy to have met you through the DeKooning Book Club....I enjoy reading what you have to say in your blog. I recently had to remind myself to NOT talk reality/shop at a garden reception. Hard to find the right words sometimes that are both real and not shocking. I, too, think you were not that out of line, but that internal "uh oh" is a pretty good guide, so I am all for you honoring it.
I envy your wonderful studio, too.

Delighted to meet you via the Dekooning Twitter book group. Love your thoughts and concerns about, well, just about everything I have read so far, albeit briefly. I have been at it for 30+ years, mostly ceramics but painting as a dirty little secret I pretty much keep to myself. I have a 14 year old son, work hard to be a good mother, respectful wife (hehe) and a contributing member of my community. Oh, then there is that thing which I can't ever let slide to #2- my art. sooooooo, look forward to connecting now and again. Cheers! ps- I don't think you were rude to your sister's friend, IMHO. But, I admire your willingness to be more civil. I relate. :)

Thanks to Liz and Mary Anne for your comments. It's great to make friends via the DeKooning book club. Isn't Alyson Stanfield great?

Yes, I'm really lucky to have this studio! It's been a lifelong dream and I can't begin to say how much I'm appreciating it.

I don't think many people (except other woman artists) appreciate how hard it is to juggle family, jobs, and justify taking the time and resources for doing art. Now that I'm 58, my boys are grown, and I'm going full speed on my art career. Just hope it's not too late.

2 women artists I think about with regards to ramping up late - Mary Heileman http://www.newmuseum.org/exhibitions/401 and Louise Bourgeois http://en.wikipedia.org/wiki/Louise_Bourgeois

I love Louise Bourgeois. I wasn't familiar with Mary Heileman, but just checked her out at the New Museum's website. I'll google her, too, to find out more about her. Beautiful work.

Now we need to find older female artists living in obscure places who made it!

How about Barbara Cowlin? Oh and wasn't Georgia O'Keefe a neighbor? ;)