All in One Place, but Not in Place 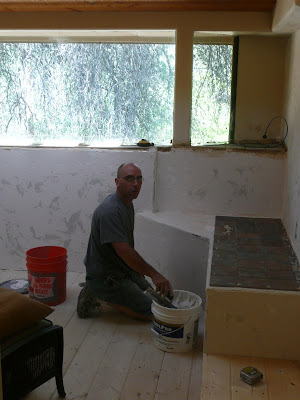 Here's our intrepid worker, Mike, finishing up a corner in our new home. 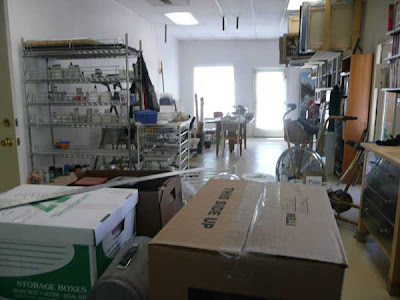 Small sampling of the boxes left to unpack in my studio. View toward east side of studio. 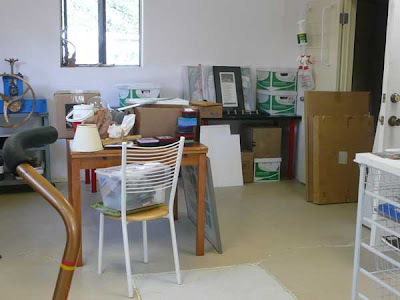 More boxes to unpack. View of west side of studio.

We did the big move last Friday and Saturday. Hired 2 Men and a Truck. They were quite remarkable. Two rather average sized guys showed up at our door on Friday morning and I thought Uh-Oh, how are they going to do this? I've never seen such strength packed in 2 not very big people.

They parked the van on Vananda and ran a ramp across the sidewalk (in the air) onto the property in front of our apartment. Everything had to be carted up the entry way stairs. They literally ran from the truck to the apt. each time they dropped off a load of boxes. It took them more time than budgeted to pack, not because they were slow, but because we had so much stuff in our apartment.

By about 5 p.m. they tackled my studio. I couldn't watch as they carried the press down the stairs. They got it down without injuring themselves, or the press. I breathed a major sigh of relief.

In addition to everything else, we had a rented storage space. Even though the van appeared full, the heroic 2 Men insisted on going to the storage room, where they unpacked a chunk of the van, repacking and fitting all our additional stuff in.

They drove to Tucson. We drove to Oracle. Didn't get home until about 10 pm.

The 2 Men arrived at 7:30 am the next morning, raring to go. Oh, to be young again. Anyway, they unpacked much faster than they packed, leaving us with mountains of boxes among our not quite completed phase 1 renovation.

Been unpacking ever since. I know I won't remember where I put half the stuff. My studio is beginning to take shape.

It's all in Oracle. We're here! My next post will be back to making art. I promise!
Posted by Barbara Cowlin