The Boy Eats Broccoli (with Thanks to Carla Reed, Jeremiah and Corinne) 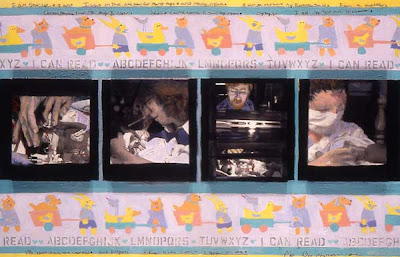 Twenty some years ago, our son Mathew was born. He was very early. 3 1/2 months early to be exact. He spent a long time on a respirator in the Neonatal Intensive Care Unit at St. Joseph's Hospital in Phoenix. He weighed 3 lbs., 15 oz. when we were finally able to take him home. He was still on oxygen and needless to say, was very fragile.

It wasn't until he was 10 years old that I created the painting you see. The images in the small canvases are xerox transfers of the photos my husband Jim took while Mat was in the NICU. I used gel medium to create a "skin", which held the ink from the xerox, once the paper was dissolved in water. I painted over the top of the images. They're a bit hard to see at this size.

The first is of Mat in the incubator with multiple tubes running in and out of him. The hands are mine and Mat's big brother, Jeremiah's.

The second is of me, holding Mat. This was a very big deal. He was 3 weeks old before he was strong enough to be taken out of his incubator. It took 2 nurses to get him out, what with all the wires and tubes that had to come with him.

The third image is of Jim, looking into the incubator. I took the original photo.

The fourth is of Jeremiah, holding his brother. At this point, Mat was in "Feeding and Growing", the area in the NICU where the job of the infant is to eat and get big enough to go home. Jeremiah was such a trooper during the whole time Mat was in the hospital. He brought his homework every night and did it by Mat's bedside. I don't think he ever once complained about all the time he had to spend at the hospital. 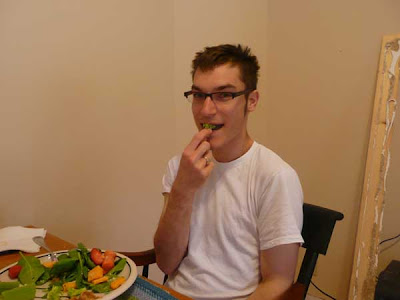 Guess who?! Yes, this is Mathew. Home from college. Eating broccoli, and a variety of raw food items he prepared for himself for lunch.

Now, this might seem like nothing to remark on. But it is. A family joke has always been that Mat never lets anything green enter his mouth except mint chip ice cream. Getting him to eat as a baby and then for most of his growing up years was no joke at all. He needed the food to grow. And he needed to grow so that his lungs would grow, allowing them to get healthy. Eating just didn't appeal much to Mat. He did eventually eat ice cream. And bean burritos. And noodles with butter. And very little else.

His physical therapist when he was little had a mission. It was to teach Mat to tie his shoes. And to eat broccoli. Many sessions were taken with Carla Reed touting the splendors of broccoli. Steaming broccoli. Adding butter and other condiments. Offering it to Mat. Mat would gamely let a morsel go into his mouth, only to gag and spit it out.

I credit Mat's wonderful brother Jeremiah and Corinne, Jere's significant other, for the breakthrough you see in the photo above. Jeremiah and Corinne changed their diet to Raw Food when Mat was visiting during spring break. Apparently, it rubbed off on Mat.

There he is, actually voluntarily eating broccoli and other green things. Wonders never cease! Thank you, Jeremiah and Corinne.
Posted by Barbara Cowlin