A Scarcity of Snow Shovels 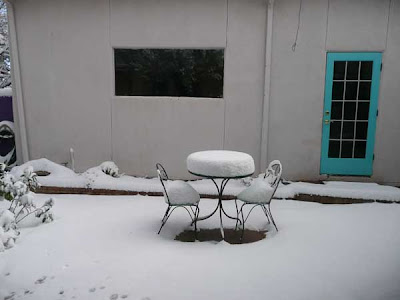 It snows in Oracle every year, or so I'm told. And as nearly two-year residents of Oracle, it has indeed snowed each winter. The thing is, it snows, it goes away, and it's hard to believe it's ever going to happen again. Today, we woke up to snow. It's really quite pretty, and I'm not complaining (too much),after all, this is nothing compared to what the people on the East coast and in the Midwest have had to deal with.

View out the window in our TV room

One thing, though. I bet they all have snow shovels galore. And even those neat little snow plows. Granted, we should have investigated the issue of the snow shovel before this latest snow event. Neither one of us did. So Jim got on the phone this morning. We discovered that obtaining a snow shovel in this part of the world is quite an elusive endeavor. Jim started with the logical place, our local hardware store. Alas, they had some kind of big shovel for the removal of horse manure, but no snow shovel. On to the hardware store in Catalina (about 10 miles down the hill from us). Nope, no snow shovels there either. Ever persistent, Jim tried the closest Home Depot, located close to Tucson. He was told that they never ever carry snow shovels. 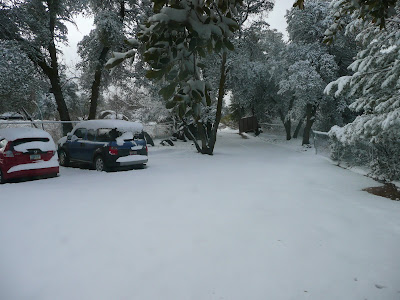 A vast expanse of driveway, and this is only part of it

I suppose we could drive up to Flagstaff (about 4 hours away) and be certain to be able to buy as many varieties of snow shovels as exist in the world. Or, perhaps the most logical thing would be to order one online. Of course, by the time we get it, the snow will be long gone. But at least then we'll have it for the inevitable next time.

Meanwhile, a warning to visitors: watch your step. We'll be having lots of snow and ice on the driveway for the next few days!
Posted by Barbara Cowlin