The Domino Effect or How to Effectively Procrastinate 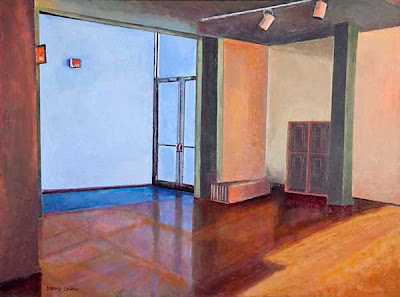 For the Docents is one of my completed paintings from my "Nooks & Crannies" series. I am currently at work on several new paintings for the series. Well, I should be, anyway. And I am making some progress. 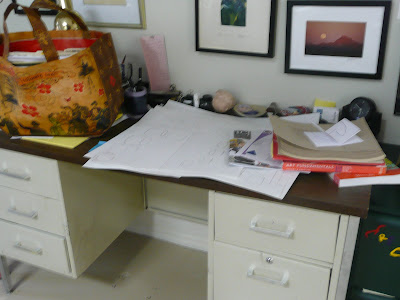 Besides painting, I should be grading. See above. I have a pile of stuff from my Basic Design class at Tohono O'ohdam Community College to grade. I love teaching. I do not one little bit like grading. Consequently, I'll find just about any excuse to put it off. Tomorrow is class. So I need to get with the program and deal with it. 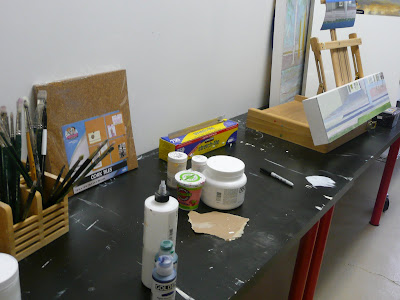 However, somehow there doesn't seem to be a single surface in my studio that isn't piled up with stuff. And I need a surface to spread out the student work in order to do the grading. This table isn't so bad, but it's part of my painting set up, and I hate to mess with it, because then I have an excuse not to jump into painting. 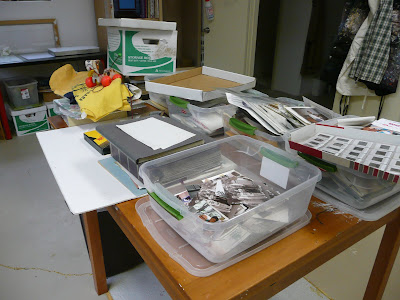 Ouch. This one I wouldn't consider touching. I'm sorting family photos (many boxes of photographs in a big jumble). The idea was to put them into some sort of order. Also, I plan on using some of the images for various projects I have in mind. However, now the mess is much worse than the original jumble. And it's been like this for months. No grading is happening here. 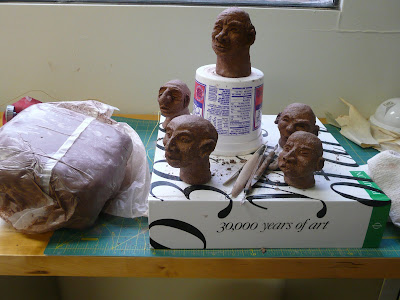 Here is my fun clay stuff. I'm making lots of little gargoyle guys. Not sure why. But you can see that this table would be way daunting to clear off. No grading is going to happen here, either. 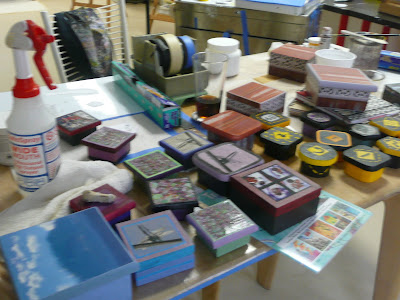 Then there are the boxes. I was doing this box thing a couple years ago. I got a wild hair and started making a new series of boxes. Road signs, the yellow and black boxes on the right. These are for the online store for my husband Jim and my project on US Route 89 . Clearly cleaning up this space is too much to tackle right now.

It seems I have the domino effect going on here. I'm not willing to just shove stuff aside. In order to clear up the studio and create a surface upon which to grade my community college students' work, I want to finish what I started. But each table is piled with stuff that represents many of hours of work before it can be cleaned off. That's the domino effect. Nothing gets done because there are so many things that need to get done before the real thing that needs to get done can get done.

And thus, you get a glimpse of the inside of my brain right now. Maybe it's just too scrambled to do justice to grading all of this work right now anyway.
Posted by Barbara Cowlin

Wow, Barbara, this is so revealing of the whole catastrophe! Thanks for sharing the blow by blow roadblocks with words and photos. Whatever did you wind up doing?

Well, my husband (my hero) arrived in my studio after reading my blog, and hauled in a card table. A clear & clean surface. No more excuses; I graded the projects!

LOL Wow Barbara, it didn't take you long to get your new studio space looking like you've been there for years!! I know the feeling of having every surface covered and really love it when I pile things on my reformer and then I have a great excuse not to exercise.

What a great idea, Melody. My old Schwinn exercise bike lives in my studio. I'm pretty religious about exercising, but always looking for an excuse not to. I hadn't thought of it as a holder for the various things I could hang off of it!

Glad to see you're hard at work in your studio, by the way.