Of Friends and the Homeless 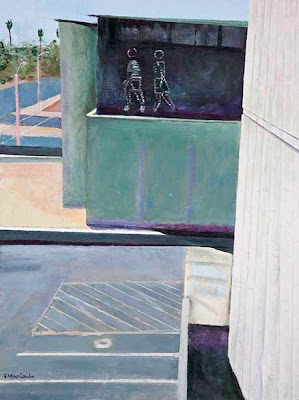 I was up until past midnight the evening before I needed to bring my work to Phoenix to be installed at the Burton Barr Central Library gallery. I was finishing this painting. It's called Looking West, and is part of my "Nooks & Crannies" series. I ended up completing 20 new paintings for this show. It took a bit over a year.

While installing the show last week, people kept drifting in from the library. At the time I was pretty absorbed in getting the work hung, but I did end up having conversations with some of the people who were curious about what I was up to.

While we were waiting for the library to open so that we could haul the paintings in, it was clear that the sizable crowd waiting with us outside was comprised mainly of homeless people waiting to get in out of the heat.

One of the things I was hoping for in doing this show was to have an appreciative audience. I was especially hoping that some people who are familiar with the Phoenix Art Museum would come by and recognize that the spaces my paintings are based on are from the Museum. What I didn't think about were the homeless people who would also be drifting through the gallery. To be honest, they didn't cross my mind.

One guy in particular stick in my mind. He came into the gallery and spent a long time looking at my paintings while they were being hung. Then he engaged me in conversation. It turns out that he had gone to RISD (Rhode Island School of Design) and is (was, had been?) a graphic designer. He was excited about my work. He said he was relieved to see someone in the world who saw things in a similar way to his way of viewing the world. He said some really perceptive things about several of the paintings. Then he showed me a few photos he'd taken on his phone camera of a few of his own nooks and crannies. He apologized for their quality, saying that he'd had to hock his camera and didn't have the money to retrieve it. I wish I could have helped him out.

The opening came. It was Phoenix First Friday. I anticipated a sizeable crowd. Perhaps because it was Labor Day weekend, the big crowd just didn't materialize.

I did, however, have a steady stream of friends who came by. I was so amazed and touched that they would take the time to see my work and to see me. It was nice to have a chance to spend some time talking to friends I hadn't seen in awhile.

So, the work is up. The first reception has happened. Another First Friday to go (October 2). Meanwhile, I hope that some of the people who use the library will come through the gallery. Perhaps my work will resonate with a few more visitors.
Posted by Barbara Cowlin